“Our small year turned into a big year fast!” 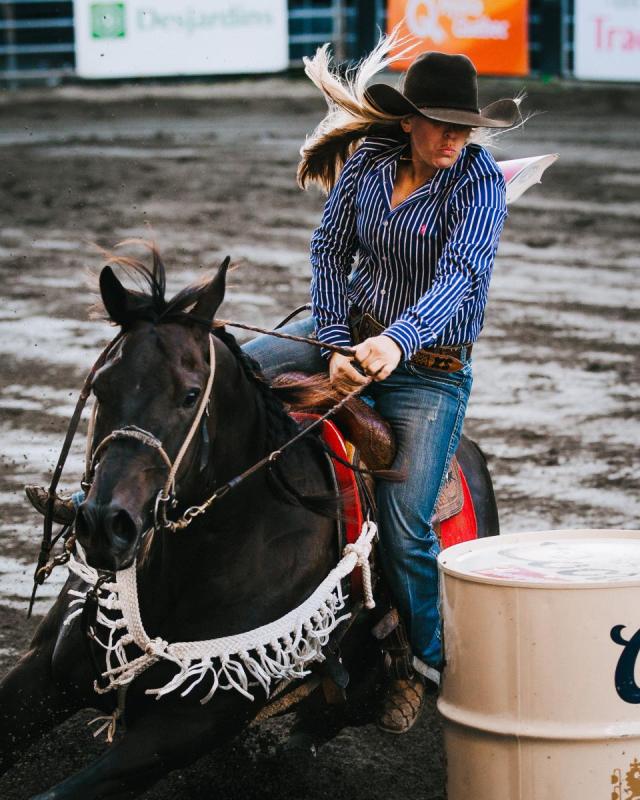 Kindyl Scruggs & Bull
“Our small year turned into a big year fast!”
By:  Tammie Hiatt
Photo Credit: Emily Gethke Rodeo Photography
The Southaven, MS cowgirl has accomplished so much since joining the IPRA in 2010.  In 2016 she not only earned the world championship but also set a record as the season’s high money earner. She added to her resume with IFR average wins at IFR47 and IFR48.  Scruggs earned reserve world champion status in 2015, 2017 and 2018.
Kindyl currently leads for her second world title as the IPRA regular season winds down.  When asked to sum up her 2019 season her reply was very simple, “a lot better than I expected”.
She went on to elaborate, “Bull had a couple of injuries at the end of last year and I had them taken care of and he was laid off until May.  I thought I would give him a couple of easy weekends when we started back.  I ran him at Athens, AL but we drew up in the muddy performance and didn’t place.  The next weekend I entered two rodeos and he won both of them and he’s not had a bad weekend since.”
“I hadn’t planned to haul much at all this year. But it’s actually been really enjoyable for me, I’ve had more fun this year than ever before,” said Kindyl.
“Things just started falling into place and it wasn’t until the last couple of months that it became evident that we had a chance to go for another world title.”
“It is very exciting to be running for a gold buckle.  The fact that it wasn’t a goal initially just makes it the icing on the cake,” said Scruggs.  “I’m entered at the National All-Region Finals in Lexington, KY and then Bull and I will be going to the Junior National Finals Rodeo in Vegas.  Avery Wilburn will be running him there.  She’s 12 years-old and is the only other person to have ridden him since I have owned him.”
Money Red Down Home or Bull, is an 8-year-old gelding that Kindyl purchased from Chantal Augar as a 4-year-old futurity horse.  “He was born and raised in Canada.  That’s why he does so well in the winter, he loves the cold weather,” said Kindyl.
“I don’t plan to change anything on his routine before the IFR, just good old-fashioned riding.  I try to ride him every day and don’t let him go over a day without being rode.  He gets fresh and strong, especially in the winter, so I try to keep him ridden.  I’ll keep him in shape and keep his wind up.”
“I try to take him to Sherry Sunden at 2High Dollar Ranch for therapy every chance I get.  She was the one that rehabbed him after his injury.  I also take him to Finish Line Farms to spend some time in their saltwater spa and then I have magna wave treatments done to his shoulders to keep them loosened up.”
“The State Fair Arena in Oklahoma City was definitely Bull’s pen, but I’m excited about the change of venue to the Lazy E Arena.  I hope he likes it as well as he did OKC.”
“As far as my strategy for IFR50, I’ll try to win first every round and lay it all out there and let it happen.  I don’t safety up, you either know how to win or you don’t.”
For more information on the IPRA and the 50th Anniversary of the International Finals Rodeo visit www.iprarodeo.com.
###