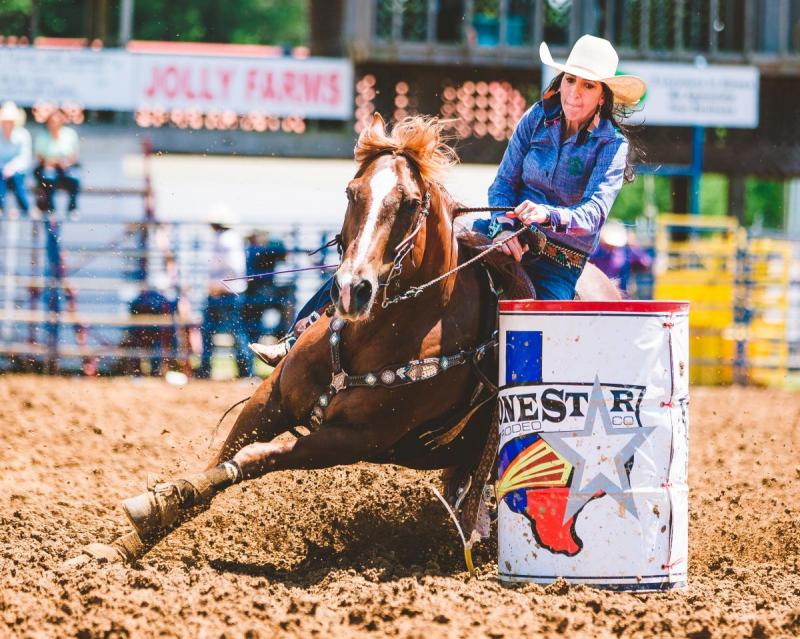 With six previous trips to the International Finals Rodeo on her resume, Amber Mostoller-Wrye hopes to secure a berth at IFR50.  “My most recent trip to the finals was at IFR47, that’s not “that” long ago, but it’s long enough to be forgotten,” laughed Amber.   The 35-year-old Murray, KY cowgirl grew up in a rodeo family and makes her living riding and selling barrel horses.“I’ve ridden six different horses at the IFR’s I’ve competed at.  The horse I’m riding now has really lit the fire in me to want to get back on the road and see what we can get done.  This gelding has a pretty good story considering where he’s been and where he is now.” “In 2016 my friend, Brittany Hipp, from Oklahoma called me about a family that was selling  their junior rodeo horses.  One of the horses was a really nice horse.  I researched him and found that he had impressive stats and had been ridden at the futurities by Brittany Pozzi Tonozzi.  I had a friend in Ohio looking for a project horse for me to ride so we went to look at him.”  “His registered name is Runnin to the Bar, but I call him Olaf.  He was a $40,000 horse but had a substantial injury and wasn’t being ridden.  I took him to get a vet check and was told it was a $5,000-$7,000 rehab on top of the time and effort it was going to take.  The sellers were close to sending him to a kill pen, but we bought him and started his rehab.” “When we got him home, he was a very angry horse.  He’d come at you when you went in the stall with him; you had to have a pitchfork with you.  For six months he was in intensive therapy.  He started trying to kick my stalls down, so in 2017 he was turned out in the pasture.” “In 2018, we started swimming him and I rode him off and on.  In January of 2019, I rode him and decided it was time to run him and see what we had.  All I had were some old videos of him running that I watched over and over.  After being off of barrels for 9 years, I entered him and sent him down the alley.  I hauled him to a few places and he started placing.” “Olaf is 13 years old and is out of Dr. Nick Bar.  I found out he originally came from Texas as a futurity horse.  Then he was used at high school and college rodeos and then as a junior rodeo horse.  He has a big personality and we’ve finally become buddies.  He’s still got his share of quirks, he doesn’t always go in the alley, sometimes he won’t leave the horse trailer after you get on him.  We can be loping circles one direction and he’ll decide to go the other way.  When he does what he’s supposed to, I give him a cookie as a reward.” “I’ve been hauling him since January and we’ve not had to do any major maintenance.  I’ve not hauled Olaf enough to really know what size pen suits him the best.  I ran him at a small pen and hit two barrels, his style changed in the smaller setup.  I have to learn to adjust my riding style.  He seems to handle ground really well.” “I’m hauling BB Hastings with me this summer.  She’s 12 years old and hopes to qualify for her first IFR.  She’s a very hard worker and is super motivated.  I’ve let her run Olaf a few times and she loves him.” “BB and I have a long couple of months ahead of us.  We are going to go to some of the fair rodeos and go from there.  BB’s comfortable in the smaller pens.  She has two horses that we will be hauling.  She purchased Beea Drinkin RedBull from me.  Red Bull is a full brother to Beea Stash of Money that Meagan Yurko won her IPRA world championship on in 2013.  Her other horse is great in the mud, so he’ll come in handy.” “I’m uncertain if we’ll go to Canada or not.  I’ve made the IFR strictly by going to the Canadian rodeos.  I’m pretty set in my ways and independent but now that I’m married I want to run things by my husband, Heath.  He is super supportive and will be home taking care of all of my babies and other horses.  He’s a team roper and we hope to be able to make the IFR together in the future.” “Olaf is the kind of horse that you can make the finals on.  When you have this kind of rodeo horse again and know when you go down the alley that if you don’t screw up, you’ll get a check, it makes it fun again.” Amber has learned a lot over the years about nutrition, supplements and finding a vet that is able to think outside of the box.  “I started using Dr. Tony Hicks at Equine Veterinary Services in Paducah, KY about 8 years ago.  He’s the only vet I’ll use.  I have friends that drive 11 and 12 hours to use him.  I believe right now; he’s booking appointments for August.” “I also work for Oxy-Gen.  I’ve used their products for 12 years and have worked for them for 7 years.  The products have made a huge difference in my horses. I have a lot of sponsors that have been with me forever and I want to thank them for staying with me through the winning times and through the “not” winning times,” said Amber. In addition to Dr. Hicks & Oxy-Gen, Amber recognizes EVS Pharm, Finish Line Farms, Hustle & Home, B Wild Tack, Lucky Combination Co., Banixx, Bijoux Fab, 2 High Dollar Ranch and Performance Horse Plus. The IPRA world standings, rodeo results, membership information and news updates can be found at www.ipra-rodeo.com