Kilgus Cashes in on Summer Run 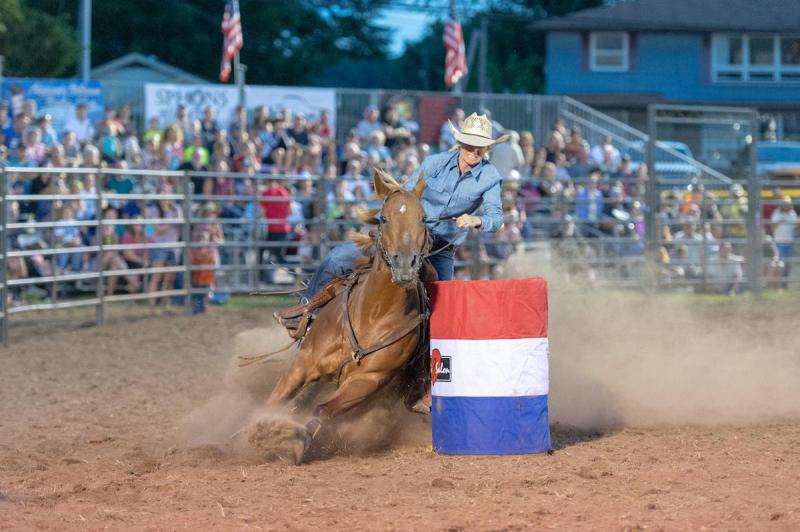 After a two-year absence from the IPRA world standings, Alicia Kilgus has been busy the last few months writing her comeback story.  The Belpre, Ohio cowgirl is currently 6th in the world standings and hasn’t seen IFR action since IFR46.  “I didn’t start going to any rodeos until June, and I didn’t really have a plan.  I just took it rodeo to rodeo.”

Recounting the last two years, Alicia said, “First I had a baby a year and a half ago. Then my horse, Nic [Nic Of Shine] came down with colitis last fall.  He was very sick, and we are very lucky he even survived.  I knew he hadn’t been feeling good but I didn’t know what was wrong.  Then he quit eating and went down hill fast.  We took him to Ohio State and they weren’t very optimistic. But he started eating again and getting his strength back,” said Alicia.  “We still have no answers as to how he got it.”

“Zach and I spend the winters in Florida, so when Nic was strong enough to make the trip, we took him there to recover.  In March of this year, I started riding him again and eventually taking him to some jackpots and we’d go from being two seconds off to making a nice run, then back to two seconds off. He was all over the place.  Last month he finally started feeling like himself again.”

“Nic has probably won between $8,000 – $9,000 in the last two months.  I unexpectedly sold my mare, that I’d also been riding this year, to the Matthews family from Arkansas. I’m excited to see how they do with her.  She is a lot like Nic except she’s an angel compared to his personality.”

“I’ve ridden Nic about five years, and he’s such an honest and easy horse to ride.  It’s so reassuring to have a horse that knows his job.  But outside of the arena, he’s meaner than a snake! He is cinchy, pulls back, he doesn’t haul well, he pins his ears and runs at you in the stall.  If we go to two rodeos in one day, he’s going to be cinchy at both.  He’s awful outside of the arena.  He’s definitely not a sweetheart, but he will let Slate pet on him.”

“It’s tough rodeoing with a toddler, there’s no time to get a young horse up to the arena to look everything over, I usually have just enough time to trot to the arena before they call my name,” laughed Alicia.  “That’s why I’m so thankful I have Nic.  I’ve got a 4-year-old sister to him that’s loping a nice pattern but I’m lucky to get her lunged every day.  Right now I just don’t have the time.”

“I usually look for cutter/cow bred horses for my prospects but when we get to Florida I want to get more into running bred and bigger horses.  Nic is only 14.1, so he’s really small.  I bought a horse last week that seemed really big, but I measured him and he was just 15 hands tall, but he seemed huge compared to Nic.”

“It would be really easy to say, “let’s just stay home”, but Slate has really been a trooper.  My husband, Zach, is usually entered in the tie-down roping and twice in the team roping so I stay at the trailer with Slate while he ropes, then he comes to the trailer and I head to the arena.”

“We are in the process of selling our place in Ohio and moving to Florida full-time.  We’re going to keep going pretty hard until Labor Day weekend and then we will be heading back to Florida.”

“I’m looking forward to qualifying for IFR49.  Zach makes sure I’m on a good horse and is very supportive and helpful with Slate.  When we are in Florida I get to ride with so many good trainers and I try to learn from all of them.  I come from a family of team ropers and didn’t start running barrels until I was in high school, so I’m always trying to learn everything I can.”

For more information on the IPRA and IFR49, visit www.iprarodeo.com.